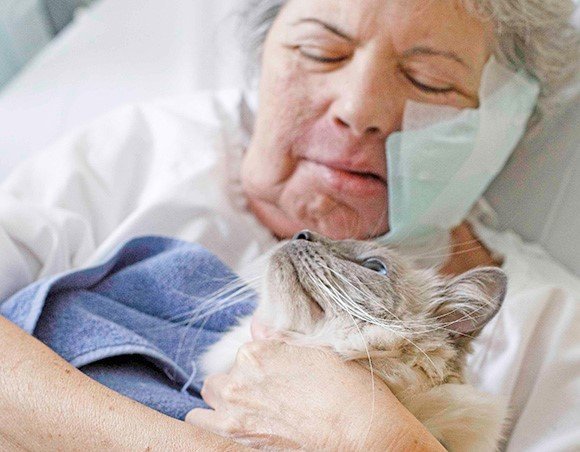 English language teacher Deise Palmieri concedes that before a visit from a fluffy ragdoll cat, her life seemed to be heading downhill rapidly. An accomplished woman fluent in multiple languages, Deise, 66, is undergoing palliative care at Greenwich Hospital.

Deise was diagnosed with an aggressive neck and facial cancer in February 2019. Deise’s journey with squamous cell cancer has changed her life, taking away basic joys like speaking, eating and her ability to work. Surgical interventions have left her in unimaginable discomfort.

Palliative care at Greenwich Hospital is helping to manage these symptoms and then in late June, Merlin the cat dropped by her hospital room. The visit brightened her world. By just lying on her bed and being there for a stroke and a cuddle, Merlin with his big blue eyes touched her heart.

The connection was instant. Merlin and her handler Danielle Lawson have since returned several times. There has also been a visit from a tabby named Teddy and his handler Monique Linssen.

Deise said: “Merlin gave me hope and the will to live. The cats have been amazing!”

The cat visits, organised through Velma’s Pets As Therapy, are carefully managed in accordance with infection control guidelines. The handlers must pass training in animal control.

Velma Harris, founder and owner of Velma’s Pets As Therapy, said her business, which can also provide dogs, rabbits and even a pony, is intended to bring pleasure to people in aged care and hospitals.

Staff with HammondCare’s Dreams Project, which facilitates dreams of palliative care patients at Greenwich Hospital, asked Deise to nominate a wish they could fulfil. All Deise wanted was to spend time with cats.

Deise, a Brazillian immigrant, has lived a remarkable life. She grew up in Rio de Janeiro and her career included studying and tutoring English at the prestigious Rio de Janeiro State University. She also served as a principal and worked at Brazil’s Cultura Inglesia, an organisation that promotes English language and culture in non English speaking nations.

Deise, who never married, was lured to Australia in 1988 by a role as director of studies at a private college teaching English as a second language. It was a new adventure in a new land.

She based herself in on the Northern Beaches, including most recently Manly, and continued to teach until the cancer emerged early last year.

Deise said she wanted to spend time with cats as it took her back to happy times raising a kitten she found abandoned behind a Rio grocery store. That cat, named Mia, had black-and-white colouring like a tuxedo suit.

“For someone who has always lived reliant on my brain, I can now live with my heart. Merlin gave me that,” Deise said. “To feel the unconditional love of a cat is precious!”

Hospital staff caring for Deise observed that faced with her illness, she had taken to her bed and had become withdrawn. After the cats came to visit, she has found a new will to live.

The Dreams Project has helped more than 160 patients over the past decade enjoy a final wish. It is reliant on donations through the HammondCare Foundation. The handlers and their cats are donating their services to the Dreams Project to help Deise.

Dreams Project Coordinator, Dr Jenny Broadbent, said the Dreams initiative was about creating joy and memories for people and their loved ones during challenging times.

“For some it’s about a holiday with family to create memories or maybe something adventurous they have always wanted to do but in all cases we work with the patient and their family to draw out the special meaning that the event has,” Dr Broadbent said.

HammondCare provides a range of hospital and community palliative care services, as well as research. Learn more at the Palliative Centre.

Here at Velma’s Pets As Therapy we are so very proud of Danielle and Merlin and send our love to Deise.